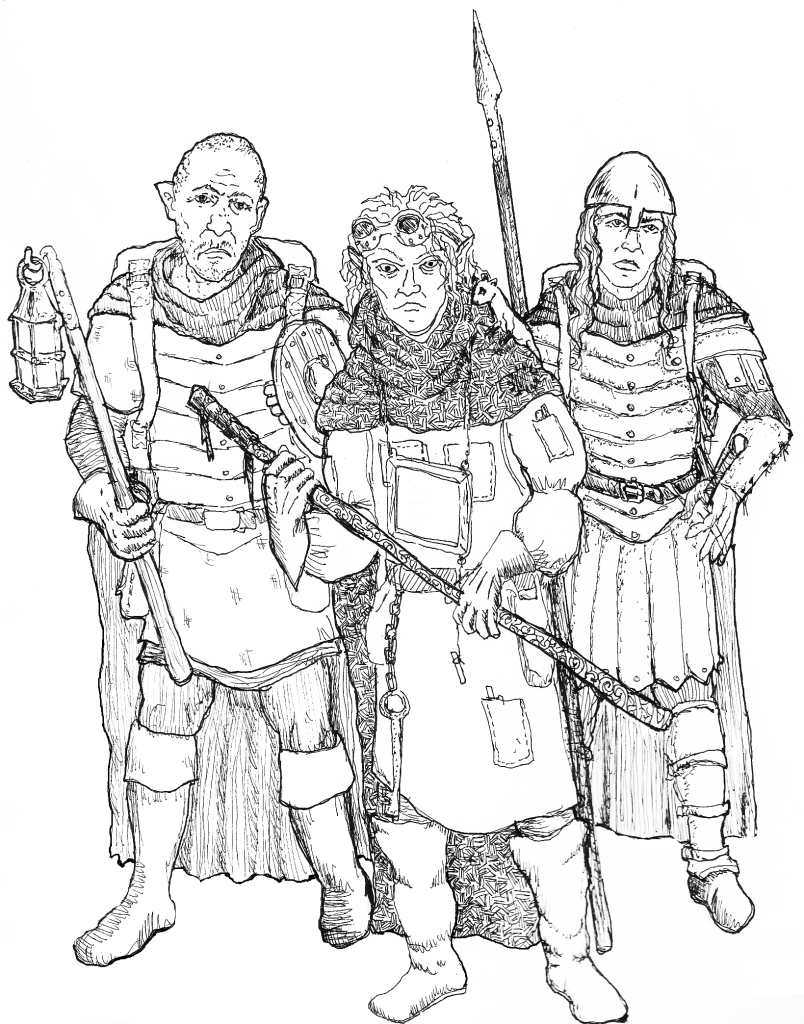 The best laid plans of a GM are often befuddled by die rolls, player agency and the preponderance of spellcasters with Weirdness Magnet in the party.

Four of my juniors have it; Jareth Mooncalled, a weird sage (with a Clarence Montague, a torchbearer and Charlene LePoire, guardswoman. Yes, henchmen with henchmen. love me some DF15); Razakeel Shadowcloak, a goblin apprentice necromancer; Jocelyn Lemru, apprentice wizard;and Ludlow the Munificent, another apprentice wizard. A (normal) dungeon crawl became something more when affected by the reality warping influence of this crew.  Ostensibly, the gang consisting of Grimbo the goblin killer and jugger player, Mario Crowfoot the archer, Nodwin Zideqick the initiate of Vejovis and the leftover hirelings of a player who left,( Jocelyn Lemru, Brodak the orc brute, and Mellarill the psychotic elf archer), had stopped by for the guild with their License to excavate (bought from an endangered Acolyte of Hades who lost at gambling) to recruit a guide or spellcaster as backup.  I offered both Razakeel and Ludlow as respondents, and they accepted both.

The group was originally aimed at dealing with the social unrest created by tensions between goblin and orc jugger teams created by the goblin quick running off with an orcish cheerleader, but they ignored that hook, and ended up trying to use their license for the purpose intended; hunting members of the Saturnine cult which two other groups had already tangled.

Jocelyn and Mellaril had been part of a large expedition into a ruined and desecrated temple where cultists led by an infernal halfbreed summoned a demon of old, a succubus and squads of doomchildren.  The assorted cultists had spent time with the succubus, also sacrificing their little toes to her, which led to an unpleasant box of treasure, and the group had also fought a demon from between the stars, and sold off the demon’s chain to one of the juggers.  The main thing they were hunting, was a stolen puzzle cabinet that served as an oracular tool for the temple of Minerva in another country. The cultists actually had quite a bit of divination equipment, most of it spoiled, and all of it stashed in a mana free zone, in addition to killing the local oracle, a nymph dedicated to Eos.  As of yet, none of the players have bothered to ask what the cult might be trying to prevent the divination of…

Ludlow, meanwhile, had been making excessive uses of a piece of chaos magic, the spell Whimsy, something that had been a plot staple in Northport when I first ran the game back in 2002 over on Playbyweb. Back then, a 100pt mage had cast it during a proficiency run in the proving grounds, and accidentally teleported herself out of her designated play area into an admin corridor in another area being run through by a different group.  The spell was also the primary weapon in the arsenal of my character Greely, whose story I hope to publish at some point.

Most of the characters from that game on playbyweb found their way into being NPC’s in the current iteration of the game.  Ludlow’s group had faced cultists that reanimated the inhabitants of a tenement street after slitting their throats, and had doomchildren and lesser demons with them.  They had been in the middle of a summoning ritual that was supposed to convert a captive child with wild talent into a demonologist, and Ludlow tried to stop the ceremony, but blew the roll, creating a gate into the nether realms that sucked in the remaining cultists and collapsed the street, after the party rescued the talented child and escaped.

Desirous of some interaction with cultists, the new crew entered the back way that Ludlow had escaped through, although he hadn’t been too specific about what exactly he had done in relation to the street collapse.  Not all of his castings had had negative effects; some exploding alchemist’s fire was dealt with by the spell summoning a water infused being with water jet at will. (He was called HoseA). Once they did realize what he had done they felt a lot more uncomfortable about the spell being used, and about Ludlow in general.

After creeping through an opening in a wall created by the street collapse, they fought off some ghouls, and a Ghast, both of which were incidentally nerfing the ridiculous firepower of Mellarill and Mario by virtue of being unliving, the presence of four weirdness magnets began to affect the plot of my dungeon.  My ghouls all are jumpers, with the limitation that they can only leap to and from the Vale of Pnath into or out of piles of bones (at least three bones from different sources) and have been variously walled up near mass graves on the upper levels of Northport’s undercity. Ghasts as I run them (think ogre sized with bad smell and a stench attack, iron hooves, teeth and claws that remain after the body dissolves when killed) aren’t jumpers. I find myself agreeing with Needles of Swords & Stitchery about undead.

So in the next room they party found a recently activated gate.  Some fairly foolish experimentation lead to the discovery that the gate lead to the underworld of the dreamlands, in addition to noticing that both necromatic and standard mana levels were elevated near it.. Now remember Ludlow’s accidental  hellgate opening? Someone else showed an interest:

I was completely ready for combat, had a nice selection of spells laid out for it (Acid jet, Frostbite, Sickness) and some cool gear laid out… and the very curious Ymid rolled a 15 for reaction, and let them hold his tablet while he investigated a magic item belonging to Jareth (Jareth incidentally has no magery, but may end up working toward a mentalist lens after this mess).  Secret rolls a plenty went down as three weirdness magnets looked at the thing,  with its glowing orange notes written in Dark one shorthand (Eldrich in Northport) hovering over it’s purple glass screen.  it is kind of a TL7+2 technomagical device, and the Ymid was kind enough to advise them not to press the red button, which would have discharged built up electrostatic energy from the device’s dynamic battery… damn good thing none of them had unluckiness or klutz.

As it was, they were lucky, activating a Windows 93 pipeworks screensaver, and accidentally opening an email from a Dark One minister of finance in need of a bit of help embezzling ingots of trade metal in exchange for some stable currency… Thankfully, I din’t roll for an accidental opening of some elder thing nudes. That would have led to a few failed Fright Checks… and probably someone hitting the red button.

They ended up having to allow Ludlow to demonstrate Whimsy (effectively teaching the spell to the Ymid… sure that is a safe idea), but I let the party vote on what he was attempting… and he got a box with a comb containing hair dye for men.  The Ymid asked for the hair product after Ludlow used it to dye his once white hair and beard (resulting in a change of avatar in my little pbp game) and then left them to continue investigating other Elder thing events.  It also left the dreamlands gate open.

Naturally, I have been scrambling through mythos wiki’s and illustrating friendly encounters for them (see this post) and plotting what sort of thing I would implement to depict the Tower of Koth. Naturally, the players intend to  destroy the gate and investigate other areas. Thankfully, I always have a backup plan for dealing with new areas of what’s under the streets of Northport.